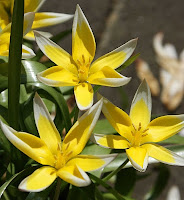 You know, I might just be tempted to say the words.  I might just have the courage to announce it, to shout it from the rooftops.  Winter, you’re over!  Don’t come back until the end of the year!

Today the sky was clear and blue but this did not equal crisp and cool. Nothing wrong with crisp and cool if rationed properly, but today the sun felt warm.  Warm!  And the birds were singing in pure defiance!  And in the pond, for the first time since we moved in about 6 years ago, there are thousands of wriggling tadpoles just hatched, which inevitably causes me to revert to a childhood state, hunched over the pond, watching in delight.  The workmen next door probably thought I was odd, but never mind. (Of course, when I was child, the garden was too wide and the fences were too high for neighbours to spy my pond gazing.)

I’m not entirely relaxed, however; I’m still crouched protectively around the sweetness of spring, never sure when the frost may yet return to bite me.  I can’t sit back and relax – not quite yet.

I swear I smelt a hint of summer.  Summer!  It was enough to stop me in my tracks, hand hovering in mid air as I reached to open the compost bin, while I almost looked around to see an entirely different season.

Forgive me.  I seem to be infected with March madness…